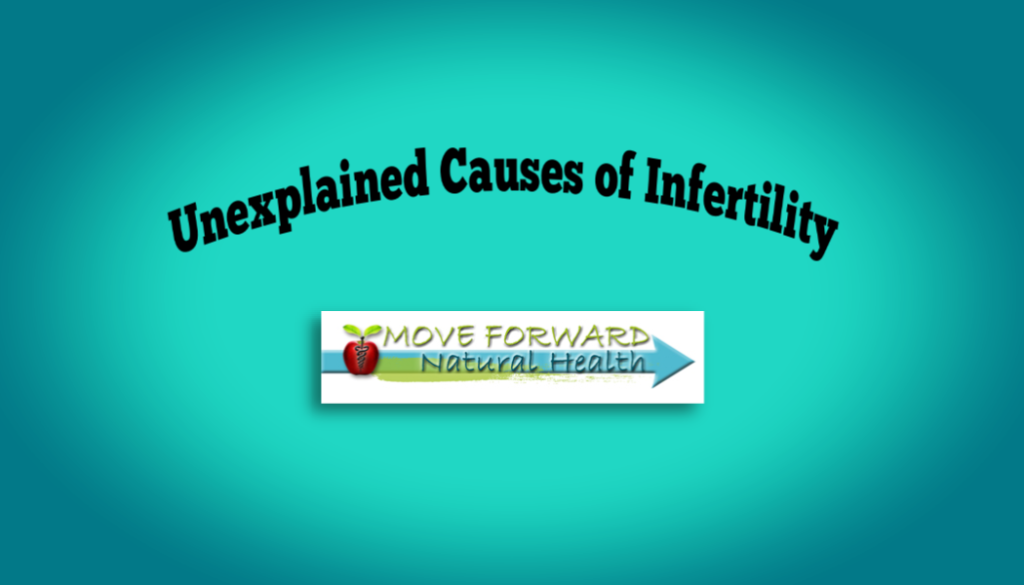 Naturopathic medicine offers a unique option for individuals who have received a diagnosis of unexplained infertility because Naturopathic Doctors are trained to look for other possibilities that traditional testing is lacking.  The current diagnostic testing options available are used to identify the major reasons why couples may have difficulty becoming pregnant but it certainly doesn’t identify all the possible reasons.  Unfortunately, unexplained infertility, is a diagnosis given to couples when all of the standard testing options are considered “normal” and the couple has been unable to conceive for at least 12 months.  This is where a lot of couples feel hopeless and become completely stressed out and concerned about the growth of their family.  Infertility is a very frustrating diagnosis for couples and choosing the next direction of care can become a very difficult decision.  The rest of the article will break down some of the most common underlying causes of infertility.

Estrogen dominance is a hormonal imbalance where a woman can have deficient, normal or excessive estrogen, in combination with little to no progesterone.  This imbalance obviously has a negative impact on reproductive health.  Our bodies are constantly bombarded with estrogen on a daily basis because it’s very commonly found in our environments.  We can be exposed to estrogen disrupting hormones through plastics, pesticides, foods, industrial waste products, and a number different synthetic chemicals used in everyday products.  Endometriosis is a common condition that usually results because of this imbalance. Endometriosis is a disorder in which tissue that normally lines your uterus, grows outside your uterus.  The most common sites include the cervix, vagina, rectum, ovaries, and fallopian tubes.  These cells continue to listen to progesterone and estrogen despite being outside the uterus.  What does that mean?  They will bleed during the normal monthly cycle and the blood now has no way to leave the body so it stagnates causing symptoms of painful menstruation, painful intercourse, and pelvic pain, but it can also have no symptoms at all.  Endometriosis usually results in significant inflammation in and around the uterus which can have a negative impact of sperm-egg interactions and possibly even prevent implantation.

Understanding a woman’s menstrual cycle is vitally important in order to properly prepare for a pregnancy.  Abnormalities in the menstrual cycle are common causes of infertility.  Day 1 of your cycle is the first full day of bleeding.  Your hormonal levels of progesterone and estrogen will drop at the end of the previous cycle which signals to the pituitary gland to increase production of follicle stimulating hormone.  This hormone helps to develop healthy follicles within the ovaries.

A follicle is a fluid filled sac that contains an immature egg.  As more follicles are produced, less FSH is needed.  One dominant follicle will secret estrogen which in turns increases the thickness of the lining of the uterus (endometrium) in preparation for pregnancy.  As estrogen increases, the pituitary releases Luteinizing hormone (LH).  This hormone triggers the start of ovulation.

The egg is released from the follicle and picked up by the fallopian tube.  The follicle from which the egg was released starts to make progesterone.  Progesterone prepares a site for the embryo to implant during pregnancy, assuming a healthy sperm was able to fertilize an egg.  The embryo moves along the fallopian tube and eventually implants in the lining of the uterus.  The embryo then starts to produce human chorionic gonadotrophin (hCG), the most commonly known pregnancy hormone, which signals to the ovary to continue making estrogen and progesterone to support the pregnancy.  If fertilization doesn’t take place, the absence of hCG signals to the ovary to stop making estrogen and progesterone.  Without these 2 important hormones, the lining of the uterus breaks down and the next period starts.

Most people of aware of the term “egg quality” and usually associated it with something only women over 40 need to be concerned about.  This is just not the case, even though woman over 40 need to pay particular close attention to this.  Signs that poor egg quality could be a concern include irregular periods, short cycles, and night sweats.  Ovarian aging can occur due to frequent radiation exposure, chronic stress, or possibly an autoimmune process.  Mitochondrial dysfunction (lack of energy production) and oxidative stress (damage to tissues) has been linked to poor egg quality which are common issues naturopathic doctors review with every patient.

The thyroid is responsible for regulating metabolism, influences growth hormones, modulates heart rate and blood pressure, and is involved in the breakdown of carbohydrates, fats, and proteins.  Thyroid hormone is important for fetal growth and development during pregnancy.  Hypothyroidism (low functioning thyroid) is a very common cause of unexplained infertility.  It’s an important gland in regards to reproductive health.  Most labs state that normal references ranges for thyroid stimulating hormone is .5-5.0 mIU/L even though the American Associated of Clinical Endocrinologist recommend a much smaller range of .3-3.0 mIU/L.  Some studies suggest for fertility these ranges are even smaller with an upper limit of 2.5 mIU/L.  The reason for this is because there is an association between hypothyroidism and ovarian dysfunction.  Decreased thyroid function is also linked to reduced levels of follicle stimulating hormone and luteinizing hormone which is vital for egg follicle maturation and for production of estrogen and progesterone.   Elevated TSH levels are also associated with a greater risk of miscarriage.  Symptoms of decreased thyroid function include low basal body temperature, long cycles, delayed ovulation, and weight gain.  Thyroid antibodies indicate an autoimmune process is occurring which has a direct correlation with increased risk of miscarriage.

Like it or not, genetics plays a huge role in regards to our health.  Now I absolutely HATE it when doctors state, “it’s your genetics” and there’s nothing that can be done.  There is no simple way to say this, that is a lazy answer.  Of course it’s genetic, every condition or trait is genetic.  Just because your genetically susceptible to a condition doesn’t mean you are doomed.  My main reason for bringing up the topic of genetics is because of a common defect I see in a large portion of individuals in my office.  MTHFR defect.  The MTHFR gene is important for a process called methylation in the body.  Methylation is a process in human biochemistry that is vital for DNA/RNA synthesis, protein synthesis, lipid synthesis, neurotransmitter synthesis and hormone balance.  I would argue this is the most important process in human biochemistry that is often overlooked by health care professionals.  The MTHFR gene provides instructions to make an enzyme called methylenetetrahydrofolate reductase which ultimately is responsible for donating methyl groups to different substrates in the body.  Methylation plays a role in regulating estrogen levels in the body.  For a woman who is having issues becoming pregnant, a MTHFR defect should be considered.  This can be rule out by a simple blood test.