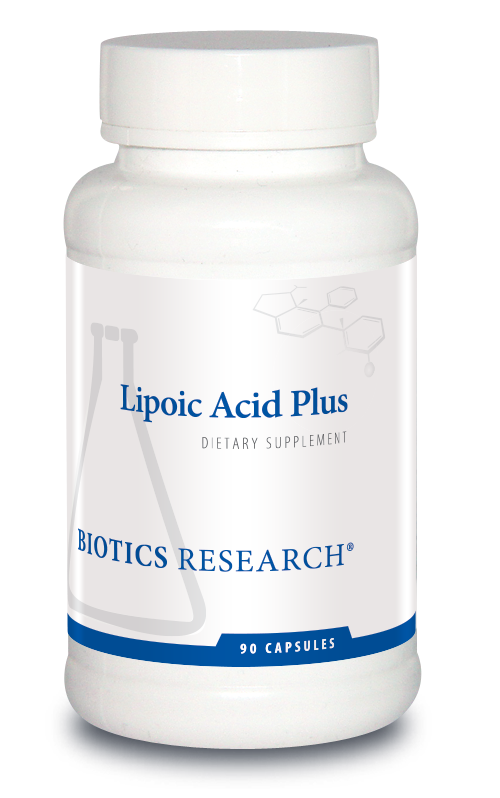 Lipoic Acid Plus supplies Alpha-Lipoic acid (ALA), a potent antioxidant and a critical cofactor for many enzyme complexes, along with vitamin C. As a powerful biological antioxidant, Lipoic acid has exhibiting the capability to quench free radicals, equivalent to that of coenzyme Q10 (CoQ10), and vitamins C and E. In the body it functions as both a coenzyme, and a necessary component for normal mitochondrial function. Unlike the actions of other antioxidants, including vitamins C and E, which are restricted to aqueous tissues, and fatty tissues/membranes, respectively, ALA has activity in both fat and water-soluble tissues. Taken orally, lipoic acid is readily absorbed into both the cellular and tissue systems. ALA has also demonstrated advantageous effects in supporting both the cardiovascular system, and glucose dysregulation. In terms of cardiovascular support, as a consequence of both its antioxidant function, and its metal chelating ability, the actions of ALA have been associated with the inhibition of endothelial activation, signifying its potential benefit in delaying both arterial plaque buildup and negative cardiovascular events. Its activity in supporting glucose dysregulation has been demonstrated in numerous studies. Lipoic acid is also involved in biological energy production, and has some heavy metal chelating properties as well.*

Take 1 capsule one to two times daily or as recommended by your health professional.

This product is contraindicated in an individual with a history of hypersensitivity or allergy to any of its ingredients.

If pregnant, nursing, or trying to conceive, consult your health professional before using this product.

Product was made and manufactured in the USA.

Save this product for later
Display prices in: USD